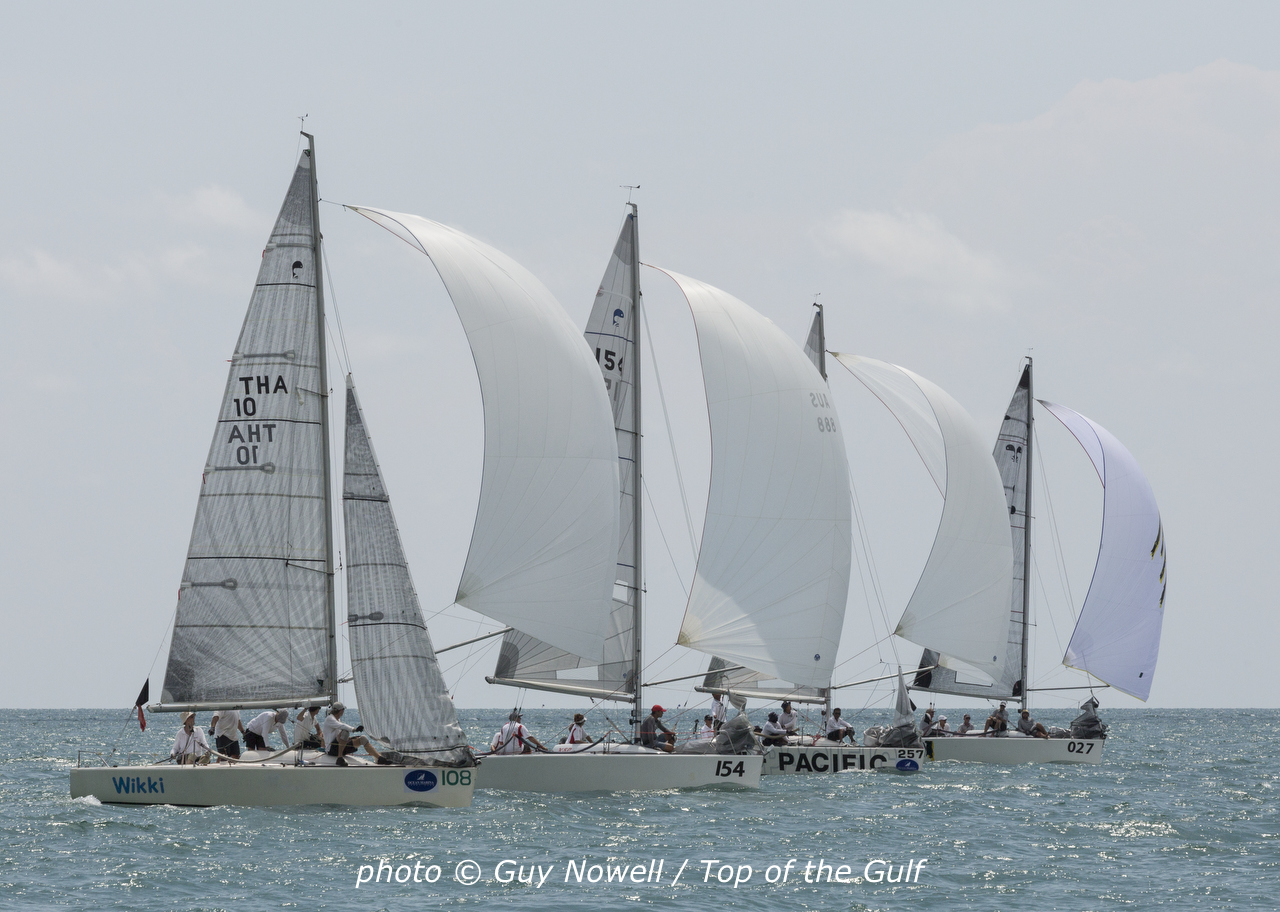 It was proclaimed the “best day of the regatta” by many as the steady breeze on the final day delivered some of the closest racing yet on the keelboat and multihulls course. Just seconds determined who would have the bragging rights at the Ocean Marina Gala Dinner and series prize-giving evening, which was presided over by Admiral Kraisorn Chansuvanich, President of the Yacht Racing Association of Thailand.

David Dimmock and crew on Loco (USA) continued where they left off yesterday adding a second win to their IRC Racing 1 tally, beating Emagine by a three second margin on corrected time and relegating THA72 to third. Kevin Whitcraft rallied his THA72 crew and in the second race lead from start to finish, claiming the last win on handicap, and tying Loco on points to claim second place overall on count back.

The overall class win, however, went to Emagine (AUS) who dropped their third place in the final race to claim the IRC Racing 1 title at their first time of trying.

Despite being the third to cross the line in IRC Racing 3's first race today, Nautical Wheeler (USA) corrected out to win – their second of the series. However, a win in the final race for El Coyote (AUS) reinforced their dominance taking the IRC Racing 3 title by a clear seven points from Nautical Wheeler in second and Magic (AUS), third.

A single course for the Cruising class finished with a stint in the Jury Room. A protest by Lady Bubbly (AUS) saw the rest of the class DQ'd for racing the wrong (shorter) course. Ultimately it didn't affect the top of the table which Lady Bubbly won by a clear margin. Le Vent (THAI) placed second overall and Thida Waree (AUD) third.

The Platu class went down to the wire. With seven of the 12 entries on the podium during the 10-race series, the racing was close and competitive throughout. A win for Ben Williams and crew on The Ferret (AUS) in the penultimate race, and a second for Rolf Heemskerk's Team Viewpoint (NED), meant the final race would be the decider.

Valeriy Dichenko's Russian team on Naiad sailed an near perfect final race and finished on a high with a clear win by almost a minute. Behind, four raced neck-and-neck to the finish and once the horn sounded and the results were in, just seven seconds separated second to fifth places.

Having never won the Platu Coronation Cup despite many years trying, Team Viewpoint found that extra ebb when needed to place second in the last race, with series-rivals Easy Tiger 111 (AUS) in fifth. The number-crunchers immediately went to work and with both boats tied on points, the count back broke in favour of Team Viewpoint. It was sweet revenge for Rolf Heemskerk and his crew who in 2012, tied at the top, lost to Chris Way on count back. With the tables turned this year, Rolf Heemskerk and his crew who were finally crowned 2017 Platu Coronation Cup champions.

Elsewhere on the course, the Ocean Multihulls class finished their series with a single race and a win was enough for Kirati Assakul and his crew on Sonic (THA) to defend their title from Bladerunner 7 (UK).

Over the four days, sailors experienced a mixed bag of conditions and in the end it was the most consistent performer over each respective series that were crowned winners of the 13th Top of the Gulf Regatta.