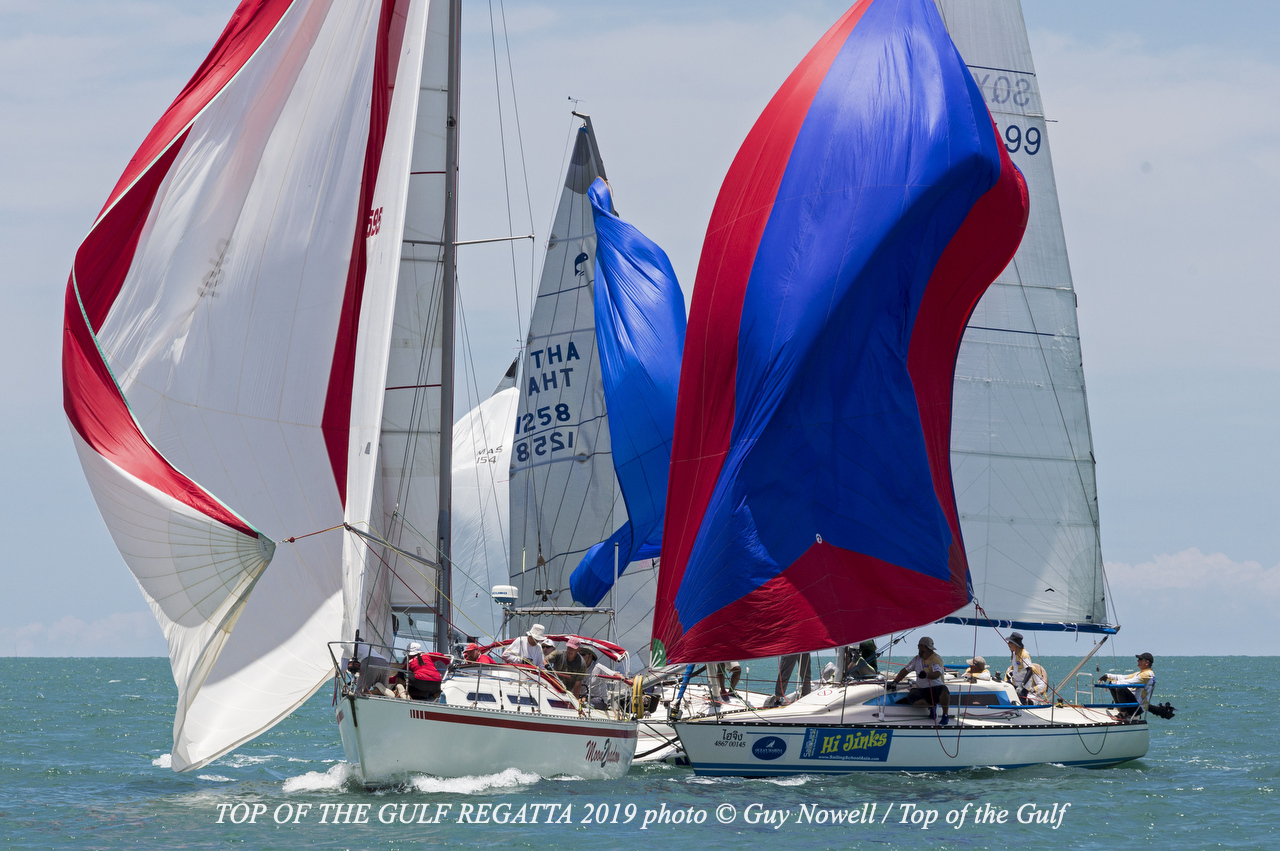 All the weather apps forecasted light winds dropping off in the early afternoon for today and thankfully, all were wrong. A solid 10-15 knots saw all 12 classes catching up on their respective series and the Race Officers and their teams working double time.

Four races for the dinghy classes and the SV14's while two or three for most of the others made for a busy day in the Gulf of Thailand. Top that off with a sausage sizzle back onshore and Day 3 has been chalked up as a winner all round.

Keelboats and Multihulls
Two races for IRC Racing 1 and two more wins for Ray Roberts and his crew on Team Hollywood (ex Provezza). The TP52 is getting the better of defending champion THA72 (another ex Provezza) which is being helmed by 2010 World Optimist Champion, Noppakao Poonpat. However, on-the-water the racing is close with THA72 getting the better of the start in today's first race and leading to the first kite drop. After which, Team Hollywood managed to find extra boat speed and passed them, holding on to claim the win.

The racing is also getting closer and closer in IRC Racing 2 with just seconds separating Fujin and Tenacious in the second race today – 13 seconds on corrected time to be precise. Fujin's two wins today moves them to the top of the standings, one point ahead of Tenacious with Lawana sitting third overall.

Team Spray and MoonShadow2 traded places in IRC 3 Racing, each claiming a first and second, meanwhile SailQuest Hi Jinks is getting the better of Twilight Sparkle and holding onto third overall.

It was all change in the Platu class today as places were shuffled at the top. Having strung together a series of four wins from five races coming into today, Chris Way and his Easy Tiger V crew had to settle for a 1,5,2 scoreline today. They still retain a 10 point lead at the top, though, and the drop race hasn't even been added yet!

The winning margins are getting narrower and narrower with just nine seconds separating first and second in the first race of today. Team ViewPoint retain their second place overall after a 3,1,5 while a win for Pine Pacific in today's final race see them move ahead of YRAT and sit third overall.

After one long race each day for the Multihulls so far, the Race Officer decided it was time to double the effort and had the multihull trio on a 2-hour-plus race followed by a quick 30-minute round-the-cans. It was Bob Garner's BladeRunnerIX who went to the party with the bragging rights after claiming the win in both races. Two second places for Sonic and two third places for Edenko leaves the multihull overall standing in that order.

Thailand SV14 Para Sailing Championship
Four fast and furious races was the order of the day for the Para Sailors and with the wind up, there was a shuffling of places as five of the seven teams made the podium today.

Undefeated on the first day, Paisol Pateh/ Mahseedi Hadumor (THA) added another bullet to their scorecard with a win in the first race today, finishing ahead of Kasempon Hondee/ Suraphong (Phong) Chitkong (THA) in second and Kristo Priks/ Peep Krusberg (EST) in third, their first podium of the series so far. Priks/ Krusberg carried their form into the second race and took the win. They went on to add two fourth places and now sit tied on points in fifth place overall.

Pateh/ Hadumor claimed three more second places today and have a six point lead at the half way point of their 4-day series, while fellow Thai sailors, Hondee/ Suraphong, hold onto second place overall with a 2,4,3,1 scoreline today.

Thailand Optimist Open Championship
Three races for both Optimist fleets and in the Gold Fleet defending champion Panwa Boonak added two more wins. A 1,2,4 for M.L. Weka Bhanubandh made up for his 11th place yesterday, and sees him move into second overall ahead of Bowonnan Chanram in third.

Dinghy Classes
Four races were completed for the dinghy classes today (Classes 8, 9, 10, 11) and it was three wins for Albert Nazarov in Class 8. Ralf Donner added three seconds and a first while Apichart Tongmak scored third places in all races to finish in that order overall.

In Class 9, Malaysian sailor Ahmad Latif Khan B.Ali Sabri Khan dominated winning three out of today's four races. Fellow countryman, Israr Hazim B.Ismail, isn't lying down however and finished the day 1,3,3,2, and sits just two points behind in the overall standings. Meanwhile in Class 10 there's little in it, with Patcharee Sringam adding two wins to her tally and securing a two point lead over Mohammad Shahieran Rin Raiman in second and Supparak Niamruksa in third.

In the double-handed dinghy racing (Class 11) skipper Muhammad syafie bin ali had a mixed day on-the-water with a 2,5,1,3 scoreline. It was, however, enough to sit top of the overall standings at the end of the day ahead of Muhammad Fauzi Bin Kaman & Hah and Jedtavee Yongyuennarn in second and third respectively.

Windsurfs
Into the second day of racing for the RS:X and RS:One windsurf classes and a pattern is emerging. Ahmad Denish Bin Aboul Hadi Kane dominated in the RS:X today with three wins from four races, while GLH Cheow Lin had to settle for a string of seconds ahead of Nuur Fatin Sulghah Neinti Abdyl Ravman who sits third overall. 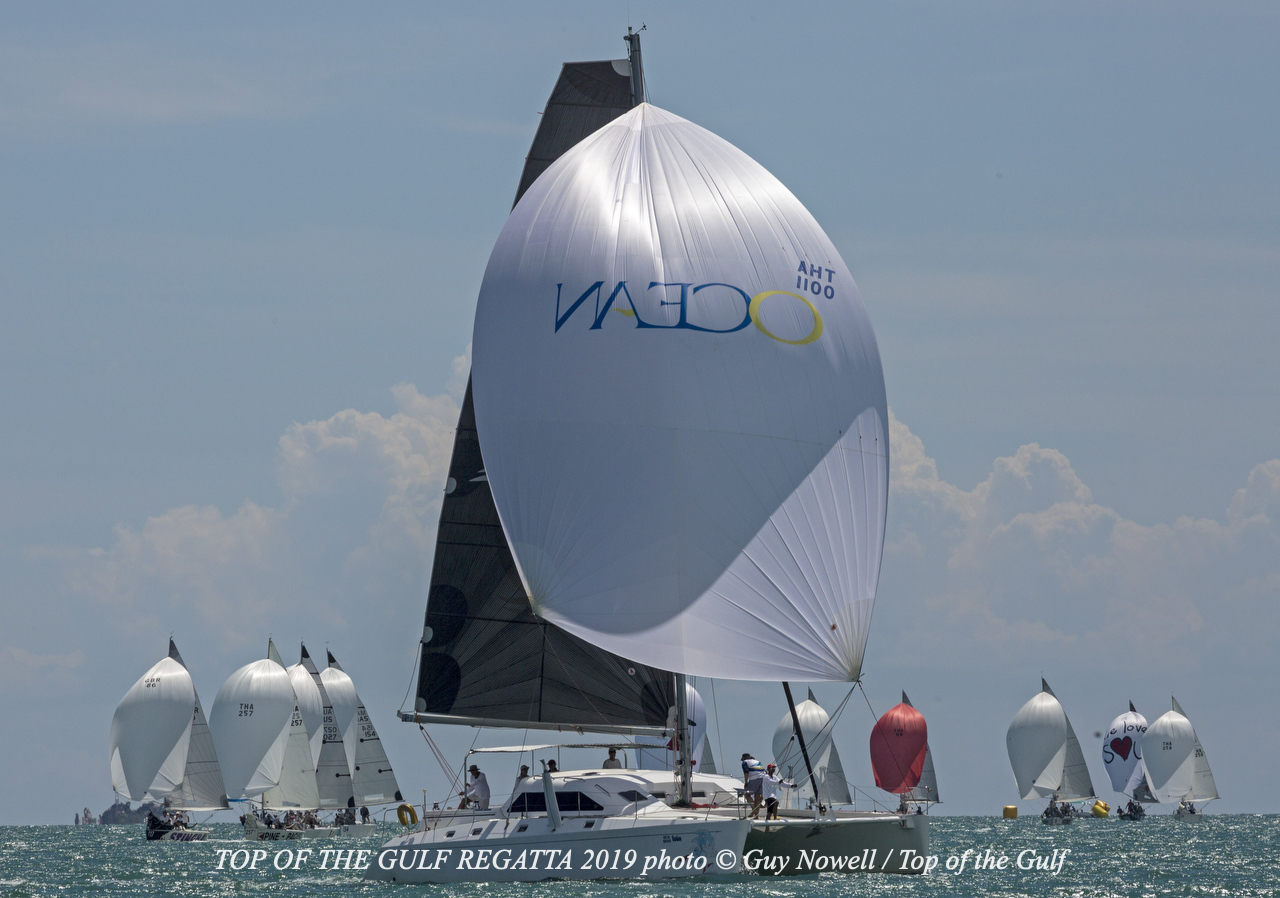 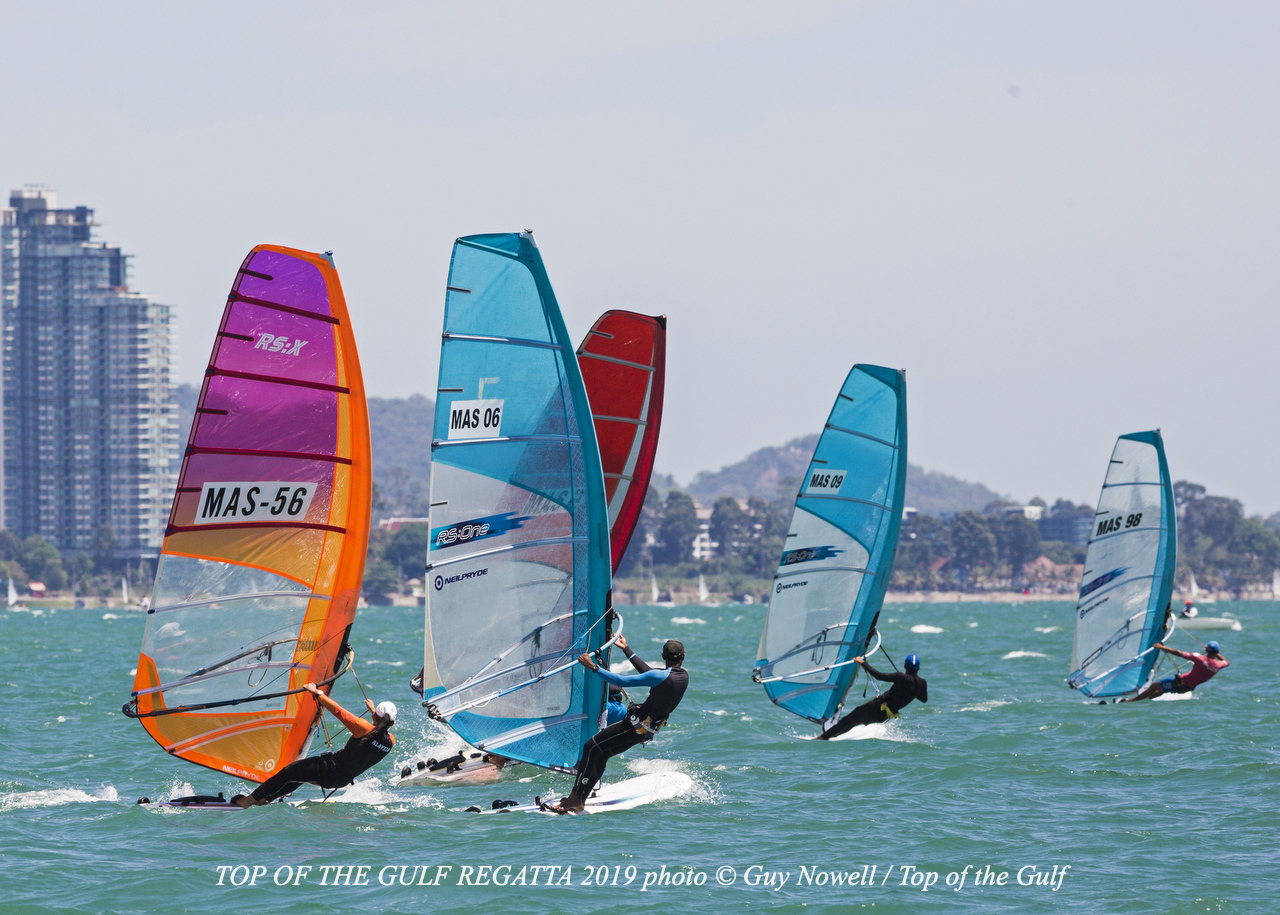 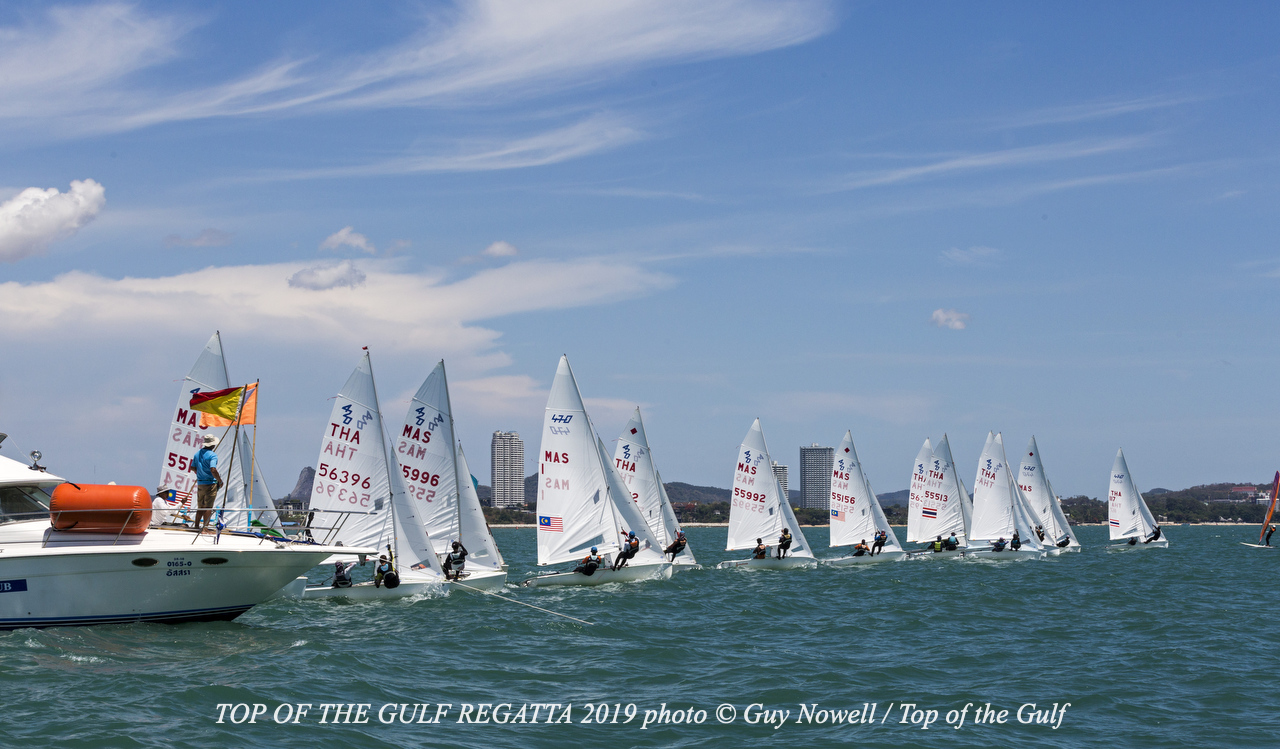 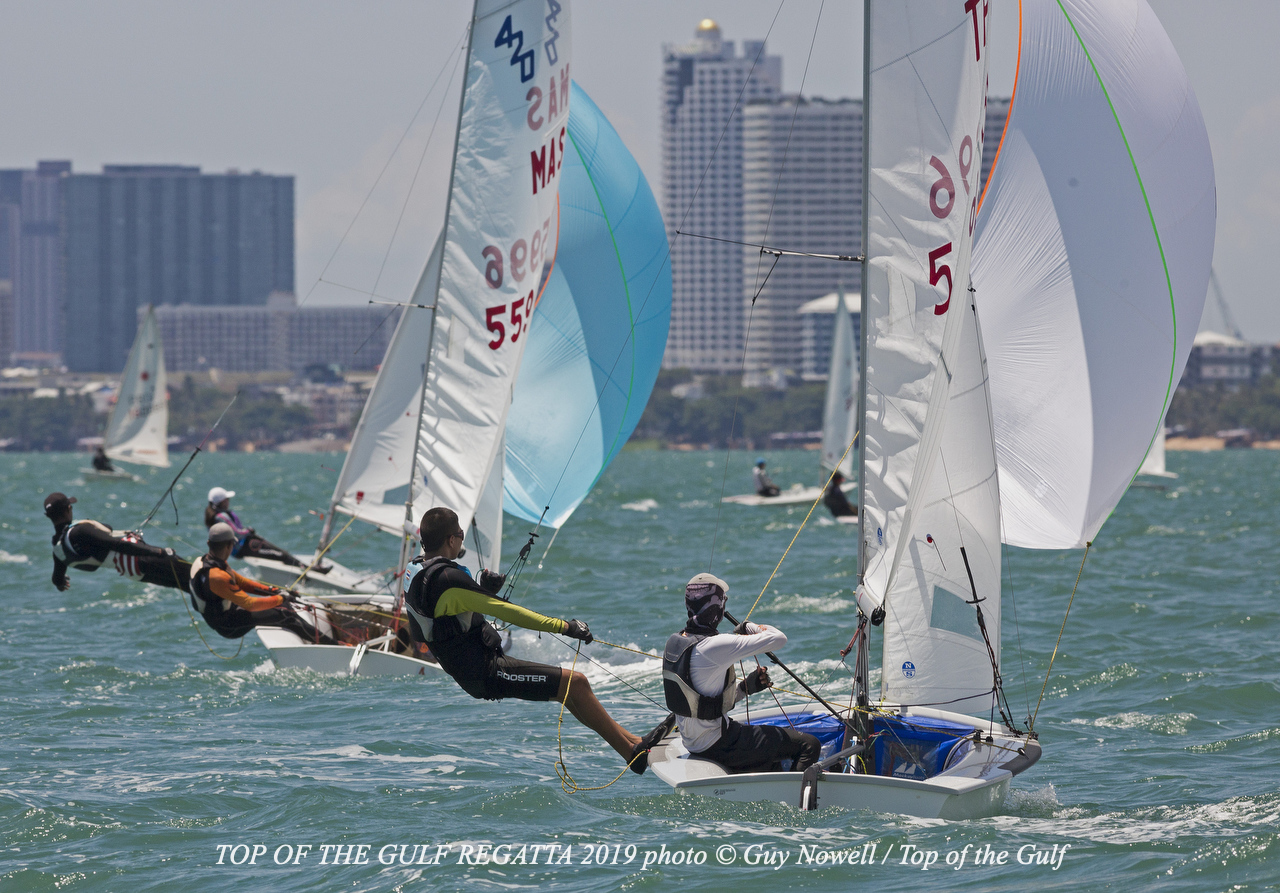 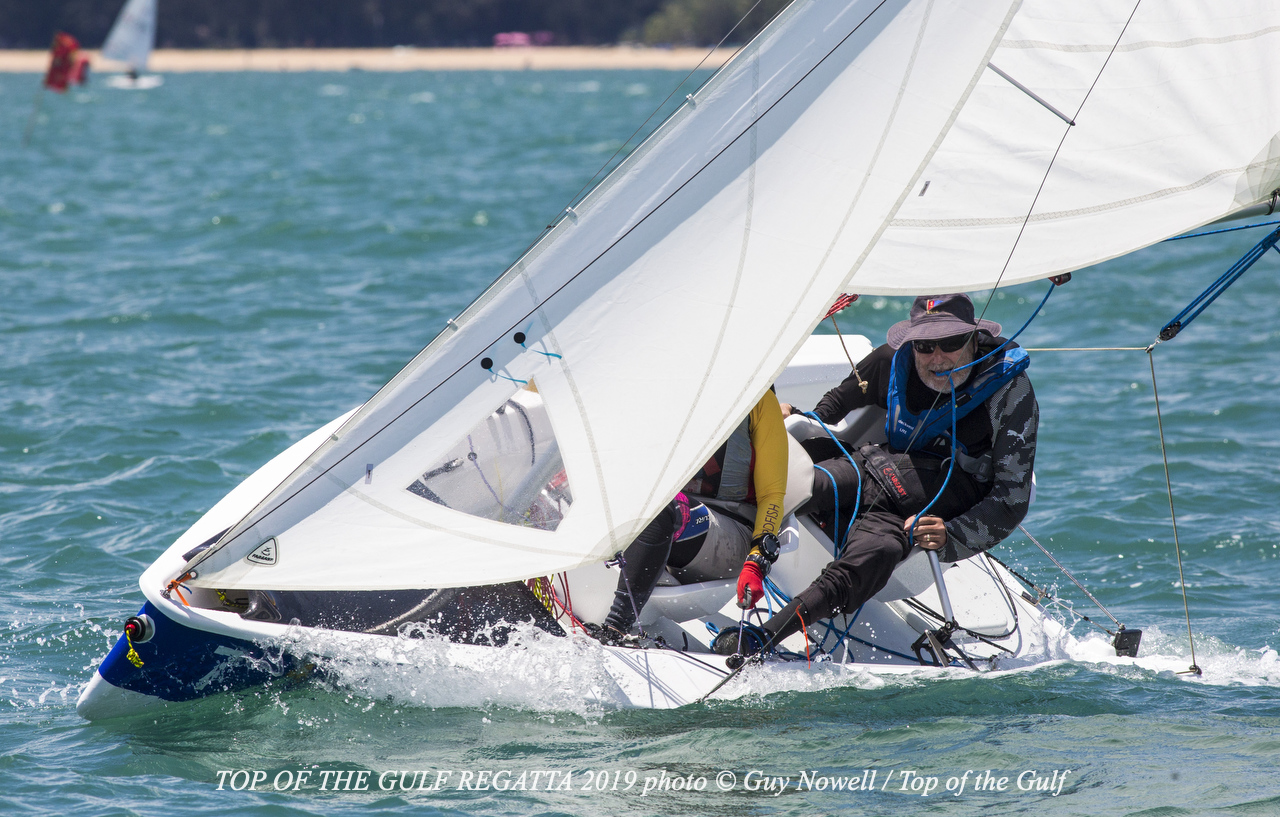 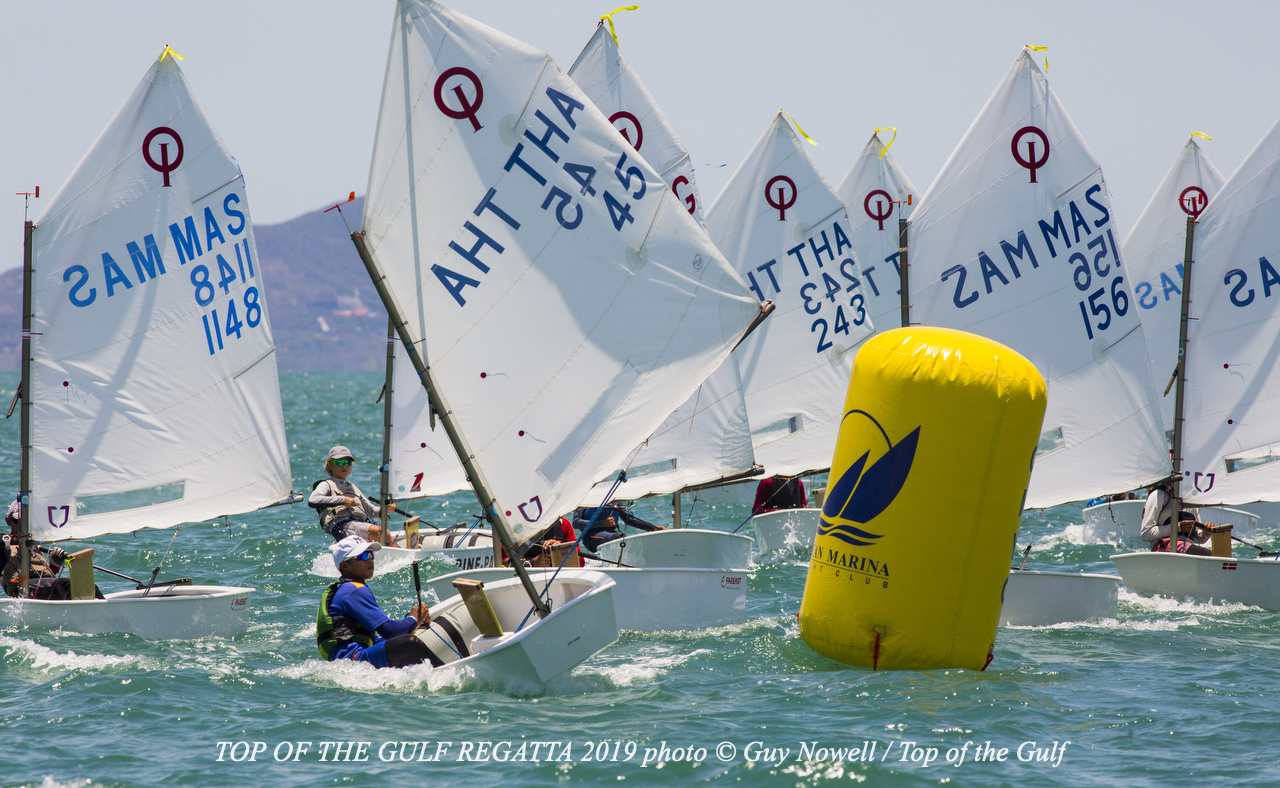