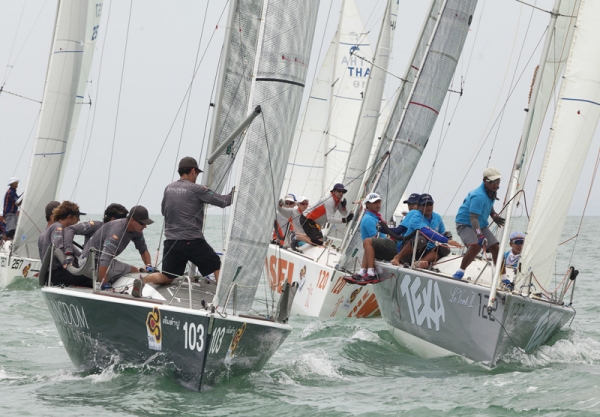 The 11th Top of the Gulf Regatta Presented by Ocean Marina is set to welcome sailors from around the world, lead by a strong Thai and Australian contingent, to compete in what has become Asia's largest multi-class regatta, held at South East Asia's largest marina, Ocean Marina.

The keelboat and multihull course sees Bill Bremner's Foxy Lady VI back to defend their title. Current holders of the 2013/14 AsianYachting Grand Prix title, Bremner has handed over the helm to Australian Steve McConaghy who will be hoping to hold off of a strong IRC 1 fleet including local favourite Kevin Whitcraft's Wan Marang, and Nick Burns' well campaigned EFG Mandrake from Hong Kong, who are competing at the Top of the Gulf Regatta Presented by Ocean Marina for the first time.

“The fleet is shaping up to be one of the most competitive yet with a number of new international entries in the keelboat and multihull classes, including top sailors from Thailand, Hong Kong, Singapore and Australia, and a number of past champions back to defend their titles ,” said Mr. William Gasson, Co-Chairman, Top of the Gulf Regatta Organising Committee.

The Coronation Cup, established to celebrate the Coronation Date of His Majesty the King of Thailand (5th May) – who himself is a proficient sailor winning the gold-medal at the 1967 SEA Games – sees a near-record line-up with crews from as far away as the UK taking part.

“The Coronation Cup is an integral part of the Top of the Gulf Regatta and has grown to become the largest one-design racing competition in the region. This years fleet includes some top sailors – both regular competitors and new faces. It is a multi-national fleet with Australians the biggest contingent, and they will be challenging defending champion Scott Duncanson for the Cup,” commented Mr. Gasson.

Dominated by Thai sailors, including many from the national team, the dinghy and beach catamaran fleets are expected to exceed 50 entries with the Thai competitors up against a strong team from Malaysia as well as sailors from Singapore, Hong Kong and beyond.

The Thailand Optimist National Championships is the Kingdom's second-oldest sailing competition. Celebrating a milestone, it's 40th year, a record fleet of more than 130 boats is expected.

“We have hosted the national optimist championships as part of the Top of the Gulf Regatta since we started the Regatta 11 years ago. Providing a competitive racing opportunity of international standard has helped develop many young Thai sailors who have sailed and won in World competitions recently,” added Mr. Gasson.

“We are expecting a record fleet of more than 130 optimist sailors. The large Thai fleet are up against sailors from Malaysia, Indonesia, Singapore, Hong Kong and Myanmar”.

The Regatta has been active in supporting grassroots sailing and youth development since its inception and this year Ocean Marina Yacht Club have sponsored a group of young Thai sailors from the Phuket Sunshine Village orphanage in Phuket, to compete in the national championships as part of the Phuket Youth Sailing Club team.