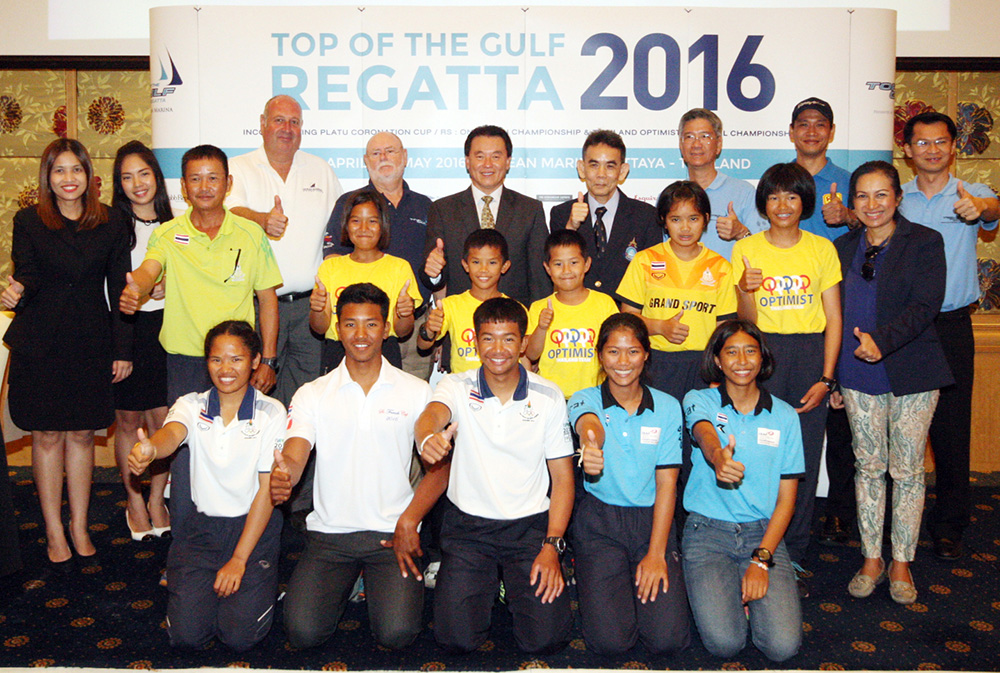 The 12th Top of the Gulf Regatta Presented by Ocean Marina is set to welcome a diverse fleet of 200 plus boats and more than 700 sailors from novice to national and regional champions, Olympic windsurfers and dinghy specialists, and world record-holders to the Gulf of Thailand 30th April to 4th May, 2016 to compete in what has become Asia's largest multi-class regatta hosted by South East Asia's largest marina, Ocean Marina Yacht Club in Pattaya, Thailand.

The racing yachts will compete over three IRC Classes (IRC 1, IRC 2, IRC 3) lead by a fleet of TP52s – the high tech 52-foot racing yachts from the Mediterranean racing circuit. Top sailing talent include Ray Roberts (AUS), multiple regatta winner in Asia and Australia, and past winner of the AsianYachting Grand Prix and Michael Spies (AUS), former record-holder of the Rolex Sydney Hobart Yacht Race amongst others. In IRC Cruising a large fleet of Thailand-based boats with domestic and international crews will battle it out including the 90-year old classic 6-metre 'Selma', while the Ocean Multihull Class will be lead by past winner Kirati Assakul and his 52-foot 'Sonic'.

The largest gathering of one-design yachts in Asia, the Platus will be competing for the prestigious Platu Coronation Cup. Having won in 2002, 2008, 2010, 2014 and 2015, a win this year for former Australian youth champion Scott Duncanson, will make it six in total and an unheard of three-peat. However, past winners Chris Way (2012) and local favourite Wiwat Poonpat (2004 and 2007), together with crews from Russia, United Kingdom, Holland, Australia, Malaysia, Singapore, Japan and Thailand, will be doing their best to stop Duncanson's charge.

“The line-up of international entries looks to be one of the strongest yet. The TP52's will be joined by competitive IRC racing and cruising classes, while the line-up for the Platu Coronation Cup  reads like a who's who of one-design sailing in the region,” said Mr. William Gasson, Co-Chairman, Top of the Gulf Regatta Organising Committee.

The smallest boats competing are the one-person Optimists sailed by youths upto 15 years old. Racing in the Thailand Optimist National Championships, which is incorporated as part of the Top of the Gulf Regatta, a record fleet of more than 100 sailors is expected and as well as the Thailand National Sailing Team and many other young Thai sailors, the international entries look to be strong with a large fleet coming from Hong Kong.

Elsewhere in the single-handed and double-handed dinghy classes are many of the region's top sailors and Olympic hopefuls including Keerati Bualong and Kamolwan Chanyim who will be  representing Thailand at the Olympics in Rio in August, 2016, while returning for the second consecutive year is the RS:One Asian Championship – the one-design World Sailing-approved windsurf class. In what is the last international windsurfing event in the region before the Rio Olympics, strong national team turnouts from around Asia are expected with local hopes pinned on Olympic first-timers Natthaphong Phonoppharat and Siriporn Kaewduang-ngam.

Over the years the Top of the Gulf Regatta has been a valuable training ground for young Thai sailors and we're delighted to see products of that experience be heading to the Olympics this year. We're also excited to welcome a record Optimist fleet and the RS:One Asia Championship back to the regatta for a second year,” added Mr. Gasson.

The region's largest and most diverse regatta of its kind, the Top of the Gulf Regatta Presented by Ocean Marina will see keelboats and multihull classes racing over four days (1st to 4th May) and the dinghies, Thailand Optimist National Championships and RS:One Asian Championship racing over three days (30th April to 2nd May).